The Union use the College’s system of colour-coded and labelled bins in its offices and other areas.

What goes in each bin?

General waste is collected by the cleaning contractors for the office spaces, collections in the bars areas are conducted by the bar teams.

Both teams use the waste bins in either the Beit Quad or in the Sherfeild building. It is collected on a daily basis and taken to an Energy from Waste Plant called SELCHP (South East London Combined Heat and Power) in South Bermondsey, South London. The waste is burnt and steam produced. Energy is recovered from this process and sent to the National Grid in the form of electricity.

Recycling is collected by the cleaning contractors who use the waste bins in either the Beit Quad or in the Sherfeild building.

There are two central points where printer cartridges can be deposited across campus and there is one of these in the Beit Quad Union. This is located on level 2 in the reception area of the Union.

In 2013, the Union trialed using the colour coded bins in the public spaces of the bars, however due to the high levels of contamination, due to people putting the incorrect materials in these bins, little of this could be recycled.

The Union has reviewed it procedure for the treatment of hazardous waste and uses the facilities of the College to dispose of these items.

WEEE collections from departments must be arranged with College Facilities, found here: ww3.imperial.ac.uk/estatesfacilities/reportrequest/onlineforms/waste/weee.

WEEE equipment is collected by the College’s Facilities Department and deposited at a central compound at South Kensington, where it is collected by the contractor Broadband Recycling who collect all electrical equipment and take it to their facility in Harlow, Essex. All items that have a resale value are sold on and reused.

Everything else is broken down and recycled wherever possible and sold to other companies in the UK to be made into recycled materials.

Fluorescent tubes are collected by College Facilities and placed in a dedicated container at South Kensington. When the container is full then the contractor removes the tubes and takes them to their facility in Manchester where they are broken down into its component parts. The contractor that does this is called Mercury Recycling and the components that are recovered are glass, metals and mercury. Mercury is distilled into a variety of grades and sold onto other lamp manufacturing companies. The metals and glass are used in a variety of industries.

This is disposed of individually by catering outlets.  Imperial College Union uses BioUKFuels.  Used oil is stored on a bund (a metal container with sides) this is in case of spillage of container damage, this prevents oil spills.

When collected, the vegetable oil is converted to bio-diesel – BioUKFuels collect oils or fats and recycle them responsibly into biodiesel at their production facility in Sheffield, or send them for alternative recycling to other licensed facilities.

Click here to read the full audit finding and recommendations.

The Union asked the Facilities services department of College to conduct an audit on the waste generated from the Union building in the Beit Quadrangle.  Over a week period all waste for the building was audited to ascertain the volume of waste that was generated.

The findings showed that 42% of waste was recycled material that was correctly disposed of (13% paper and Card, 29% mixed). The remaining 58% was waste that was disposed of as General, non-recyclable material. See the graph below. 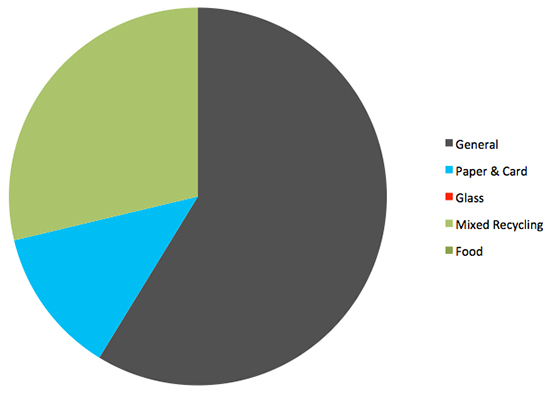 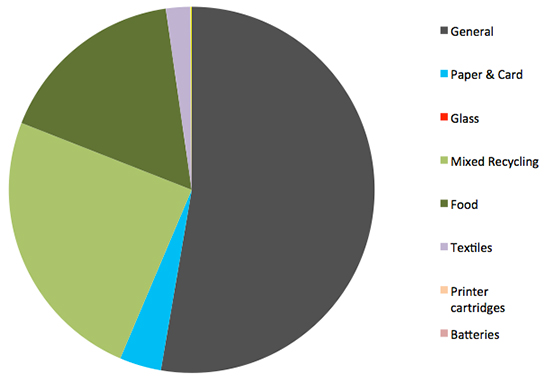 It is clear that while the Union pretty good that recycling in general, it also true that improvements in decreasing the amount of recyclable material that is disposed of as general waste can be made.

As a result of this audit, the Union has taken the following direct actions:

There are other reconditions from the waste audit report and the Union will strive to implement as many of these as possible over the next few months.