The Union are proud to announce that the zero-tolerance policy for late coursework submission will be replaced with an alternative policy in October 2017. This is a momentous win for the Union and for students; thank you to everyone who participated in either of the surveys – we could not have achieved this without your input!

In ICU's 2015 NSS Response, the Union put forward a recommendation for College to repeal the zero-tolerance policy. Ever since putting forward this suggestion, an important set of conversations with students, Reps and College members have taken place around the type of late submission policy which is best for our students. The Union have worked hard recently at lobbying College and faculties to ensure they carefully consider the student perspective in this decision process.

Following conversations which have taken place earlier this year, the Union agreed with College that it would endeavour to seek the opinions of students on this important issue. An initial poll was released in mid-November by the Union which returned insights that went on to shape further conversations with Senior Academic Reps and students. However, in the interest of ensuring the student voice was properly heard, the Union decided to circulate a second survey; this second survey received a historic turnout of 9.13% of the student body!

College rightfully acknowledged that this was a population of the student body which we could not ignore. Thirty-eight percent of respondents voted for a graduated mark reduction system, which would see marks reduced by 10% for each day that passed since the submission deadline. The Union stood by this as the preferred alternative to zero-tolerance in favour of the views of students.

Part of our pledge to repeal zero-tolerance was addressing the harsh nature of the penalty which has, on many occasions, plagued certain students. However, the Union did agree with College on one advantageous aspect of zero-tolerance which is that it enables departmental staff to identify students suffering with mitigating circumstances when work is returned late. The same cannot necessarily be said for the graduated mark reduction alternative, as a student could more easily submit a piece of coursework several days after the submission deadline and hide any mitigating circumstances which they may require support for. Holding the welfare of our students as absolute priority, the Union acknowledge this as a potential issue with the graduated mark reduction system.

Following careful thought and discussion, College in collaboration with the Union have decided to implement a system which is less harsh than zero-tolerance and arguably friendlier to the welfare of students than a graduated mark reduction policy. The new policy will mean that work that is submitted up to 24 hours after the deadline will be capped at the pass mark, anything submitted beyond 24 hours will then be zeroed.

The Union are delighted in achieving one of its pre-existing objectives by lobbying College with our most powerful mechanism: the student voice! 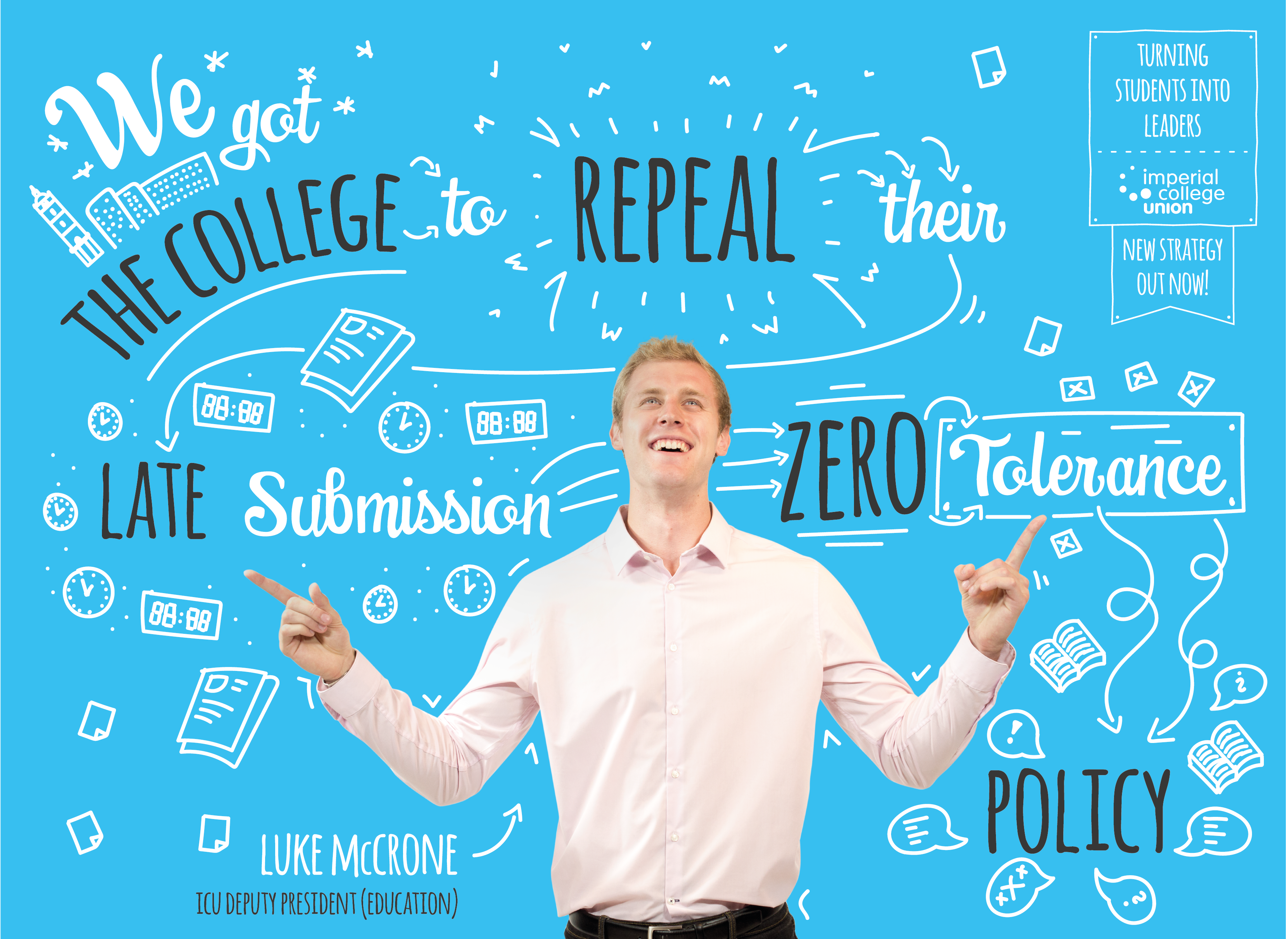