Imperial College Union has helped secure a House of Lords inquiry into the effect that the Government’s proposed Immigration Bill will have on students of STEM subjects in the UK.

Imperial College Union has been lobbying Lords Winston, Darzi and Baroness Manningham-Buller about the Bill, and after a recent conversation between Deputy President (Welfare) Marissa Lewis and Lord Winston, he successfully called for a short inquiry at Tuesday’s meeting of the House of Lords Science & Technology Committee. Imperial College Union has also been working with the National Union of Students’ International Students Campaign on this topic for several months.

The Committee agreed to set up the International STEM Students Inquiry, announced this afternoon, calling for written evidence by 20 February 2014.

Imperial College Union has begun work on its response to the Inquiry; full details of how to contribute to our response will be communicated to students shortly.

Imperial College students believe that the Immigration Bill contains proposals that damage the UK's Higher Education sector. Imperial College Union is lobbying on their behalf to have the Bill amended or dropped.

FiveSixEight is reopening on 19 September

Our student bar FiveSixEight is reopening this Saturday, 19...

As of today, 14 September, our Union Shop on Sherfield Walkway is... 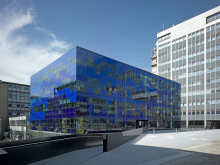